As most of you can tell by now, those of who are cooking with us under the “warm California sun”, now realize, that between  3pm and 7pm as the sun sets in the west, it beats down on our building and our apartment, turning it into an oven.

As record temperatures reach around 100 to 105, the effect of perpetual sun light on our home can be estimated at 110+. It is during those 4 hours of baking does the human body begin to slow down to the point of heat stroke (the process of your brains cooking within your skull as it swells and blocks blood from reaching it’s critical destinations.).

While the La Tuna Fire caused dozens evacuations near Burbank and concerns for our friends who live there, the dark cloud of smoke blocked out the sun on Saturday morning. As the hours of 3pm to 7 pm passed the smoky haze from the brush fire brought us relief from the unforgiving sun.

Its strange though. As sweat pours from my body, I’m motivated to continue working to bail my family out of “The August Dog Days”. I even found the time and energy to write my blog and report to whomever may be reading.

As the heat takes it toll on us and everyone around us, I realize it is tougher to handle as the body ages. Add to the fact that I am recovering from a 2.5 week sinus infection. I’ve deduced the diabetes has “complicated” my immunity from this yearly sickness I endure this time of year. It cost me 2.5 weeks of production.

And of course, our sweet little dog, Rex whose back legs stopped working. We took him to the vet and found nothing wrong with him, but we all suspect that one of his launching to or from the bed, perhaps misaligned one of his spinal discs. He’s not in pain and he can pee okay, but he can’t walk. We are trying various therapies, but we will will keep and love our Rex forever.  In any case, the visit cost $800.00, eating up our business money.

We also had a bed bug infestation that we had to prepare for and  ditch our Hollywood Bowl and Sunset Strip tickets. That was about $250.00 in entertainment cancellations. 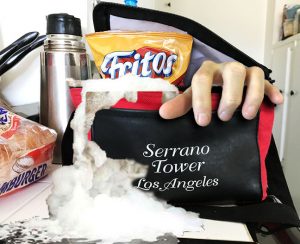